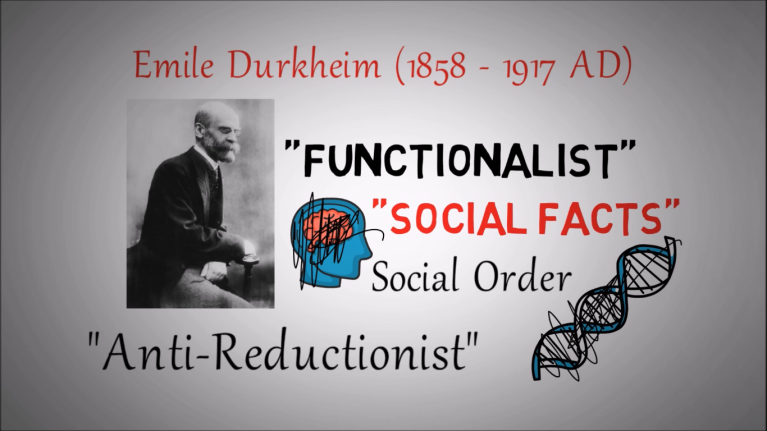 French Sociologist Emile Durkheim (1858 – 1917 AD) was a functionalist who preferred social order and regulation over individualism.

He was an anti-reductionist who rejected biological and psychological interpretation for the Man Kind’s Social Problems. Rather he wanted to focus on social structural determinants for understanding the Social Phenomena called “Social Facts”.

He gives the logic for this argument, in his major work, The Rules of Sociological Method: which goes as; An organism is formed by the combination of chemicals, then we should be able to explain the whole organic phenomenon, the behavior of organism through the laws of chemistry. But in reality it’s not true, an organism which itself is made up of chemicals shows completely different properties from those chemicals. Similarly, society which is made up of through the sum of individuals cannot be explained by the individual psychology, but need sociology. He says, individuals living in the group thinks, feels and acts differently compared to individuals who are living in isolation. Hence, he concludes that combination of individuals gives rise to the new social phenomenon called Social Facts, which should only be explained by the Sociology and any attempt to explain using Individual Psychology leads to false conclusion.

To further make case for his idea of Social Facts, he wrote a book entitled “Suicide”, where he linked the Suicide to Social Causes (or Social Facts). In this study, rather than focusing in the individual attributes, he was more concerned with the characteristics of groups and structures of society.  He showed societies with too much or too little integration or regulation will have high suicide rates. In this way, he linked individual phenomenon like Suicide to Social phenomenon.

In his last major work “The Elementary Forms of Religious Life”, he examined primitive society to study the function of religion and to find the mechanism of religion as an integrative force, as he thought the same mechanism might be used to support up a threatened social order of that time. In his study, he found religion is not a social creation but is a society which is divinized, it is a spiritual representation of power of society. So, even if traditional religion disappears it will not mean disintegration of society as long as people realize the power and their dependence on society.

In the same book, “The Elementary Forms of Religious Life”, he also deals with the Sociology of Knowledge. He claims categories of human thoughts like concepts of time and space are not only transmitted by society but also created by society, they are derived from specific social and cultural contexts. For example, division of time into days, weeks, months and years corresponds to the periodical occurrences of rites, rituals and ceremonies that society observes. And social activities are organized at specific places. For example, particular spaces are designated for activities such as working, worshipping, eating and sleeping. This leads to creation of boundaries that divides the space.

As a whole Durkheim was a conservative thinker who reacted against the atomistic or individualistic tradition of most Enlightenment Philosophy. And since he greatly revered the Society, he based his sociological study for the maintenance of social order.